The Origin of the Data Tapes

January 31, 1958: the world was watching as the United States launched its first satellite into earth orbit. Explorer I was a response to the launch of Sputnik I and II by the Soviet Union, but it differed from those historic flights in one substantial way—it carried a scientific experiment into space for the first time, which sent data back to earth. Although primitive by modern standards, the cosmic ray detector onboard Explorer I discovered the radiation belts surrounding the earth that bear Van Allen’s name today, and mark the beginning of data received from space, which today represents enormous amounts of information from thousands of sources. The origin point is here in Iowa, a moment of international historic importance that anchors the state as one of the most significant cradles of the space program.

Explorer I is gone, subsequent early satellites that remain in orbit are long silent, the ramshackle tracking stations dotted around the globe that recorded the tones sent from space have either disappeared or been wholly transformed, and Dr. Van Allen’s offices in the basement of MacLean Hall on the University of Iowa campus were dismantled decades ago. Today, the most tangible material remnants of the extraordinary effort behind the United States’ first satellite missions lies in the thousands of magnetic tapes that contain the audio signals captured on Earth as the satellites orbited overhead. 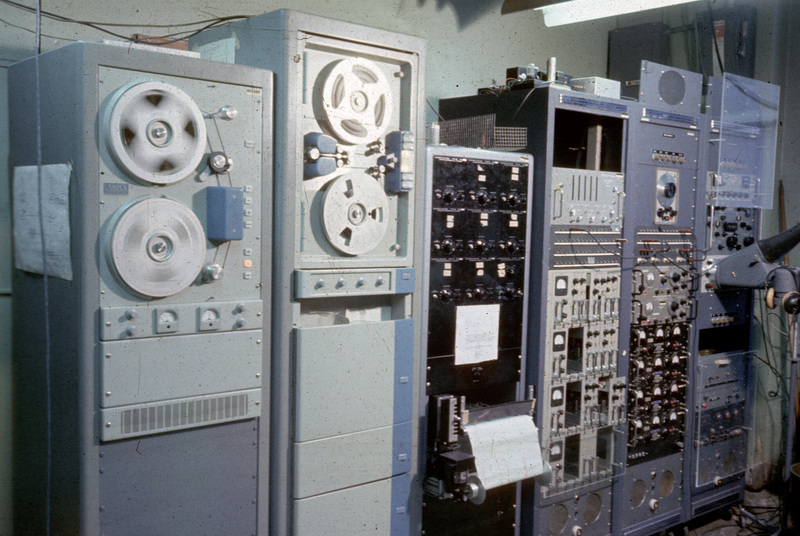 The data tapes from the Explorer missions were created during the satellite’s orbits around the earth. Once Explorer I was launched on January 31, 1958, it began to send a signal back to earth upon achieving orbit. A series of receiving stations were positioned around the globe that would listen in as the satellite passed overhead, and a technician would activate a reel-to-reel tape machine to record the signals. These tapes typically contain up to seven separate tracks of information, including a time stamp, tones and clicks representing cosmic rays hitting the detector, and occasionally a voice track where the operator of the tracking station recorded identifying information. Each tape contains up to 15 minutes of information, roughly the time that the satellite was in range. The experiment onboard Explorer I was designed to measure cosmic rays, which was Van Allen’s primary research interest. The data was the first observation of rays from space, outside the protective layer of the atmosphere. This was a phenomenon not previously observed or measured, with implications for our understanding of weather, solar activity, and the behavior of particles in a vacuum.

Once a tape was recorded, it would be numbered and sent to Van Allen’s team at the University of Iowa. Although the Jet Propulsion Laboratory received copies of a handful of the initial tapes, it quickly became easier to simply send the data straight to Iowa. Explorer I was launched in an era before the formation of NASA, and there was no centralized repository for data tapes—they simply had never existed before. George Ludwig, Van Allen’s student and a key participant in the original Explorer experiments, says Iowa was “the only archive of data tapes from those missions. We had reached agreement with [the Naval Research Laboratory] (before NASA was formed in fall 1958) that we would serve as the end archive for those missions.”

As the tapes arrived in Iowa, they were entered on log sheets and filed according to the tracking station that recorded them, such as Patrick’s Air Force Base, Lima, or Woomera, among others. The north room of the basement of MacLean Hall became a busy hive of activity. Teams of students processed the information on the tapes to produce graphs depicting the intensity of cosmic rays. In addition to working on the Explorer I data, Van Allen and his team were also preparing the experiments for follow-up missions: Explorer II was launched on March 5, 1958, but failed to reach orbit. Explorer III followed on March 26, and Explorer IV was launched on July 26. As the data from Explorer I was analyzed, a curious anomaly became apparent. At a certain altitude, the data simply disappeared. Van Allen was puzzled by this phenomenon, but after more sensitive measurements by the Explorer III satellite, the research team determined that it was likely that the sensor was overloaded, having encountered an area of intense radiation. This was the discovery of the radiation belts, which was announced on May 1, 1958, and received international publicity. The knowledge that the earth was surrounded by a layer of intense radiation had significant implications for the development of satellites and for the safety of potential astronauts, with human spaceflight in the early stages of planning.

The radiation belts were mapped by the Explorer IV satellite, and Van Allen continued his work on space physics until his death in 2006. The tapes continued to be stored in the north room of the MacLean basement until sometime after the Physics department moved to the newly-constructed Van Allen Hall in 1964. At some point thereafter, they were relocated to the “tank room” adjacent to the MacLean basement. The tank room was a space that had been excavated beneath the UI Pentacrest in the 1940s to hold the Physics department’s particle accelerator. The accelerator was long gone, but the two rooms were an efficient space to hold the growing number of UI-related data tapes, including those from the early Explorer missions. They remained in the room over subsequent decades, occasionally accessed by members of the Physics department who had worked with Van Allen, but increasingly forgotten as the pace and technology of space physics transformed rapidly in the 1980s and 1990s.

George Ludwig, Van Allen’s student and key participant in the original Explorer experiments, writes: “Not only do [the tapes] contain the extensive data on the radiation belts, but during the periods when the satellite was not in the belts, they provide measurements of the cosmic ray intensity. That information has never been mined. There might be interest sometime in reading that information to obtain a unique mapping of cosmic ray data as a function on geomagnetic position during a period when no other such measurements were made.” This activity complements UI involvement in a return mission to the radiation belts, the Radiation Belt Storm Probe, launching in 2012.

Historical Significance of the Data Tapes

This group of data tapes represents the first information gathered by the United States in space, which led directly to the discovery of the Van Allen radiation belts. George Ludwig says “It is very likely (almost certain) that most of the tapes that are in that vault are original data records (not copies). It is also likely that copies were not made and sent to any other archive. Thus, they represent the only archive of data tapes from those missions. We had reached agreement with NRL (before NASA was formed in fall 1958) that we would serve as the end archive for those missions.”

There is growing evidence that historical data from early space missions has new relevance today. Projects such as the Lunar Orbiter Image Recovery Project (website) and the search for the original tapes from Apollo 11 (website and NASA Report PDF) demonstrate the importance of access to original mission data tapes.